Maelstrom Gaming is a team competing in League of Legends. But that’s not what this is about. This is about their homepage and parallax scrolling.

I stumbled upon their homepage and realized they had extreme performance issues when scrolling. After a quick look in DevTools showed that it was fixable, I decided to write about the process as it would make a really nice show-case on how to detect, analyze and solve performance issues. The site is a single page without much content and no extraordinary features (except for maybe parallax scrolling), so I was pretty sure I could fit it in a regular-sized article.

The golden rule of optimization is: Always profile. Don’t guess where your bottlenecks are but gather hard numbers first. Although the jank during scrolling is strong enough to be visible to the naked eye and make you angry, the reason for it is not. It could be blocking JavaScript or expensive CSS operations. DevTools’ timeline can help you figure this out. 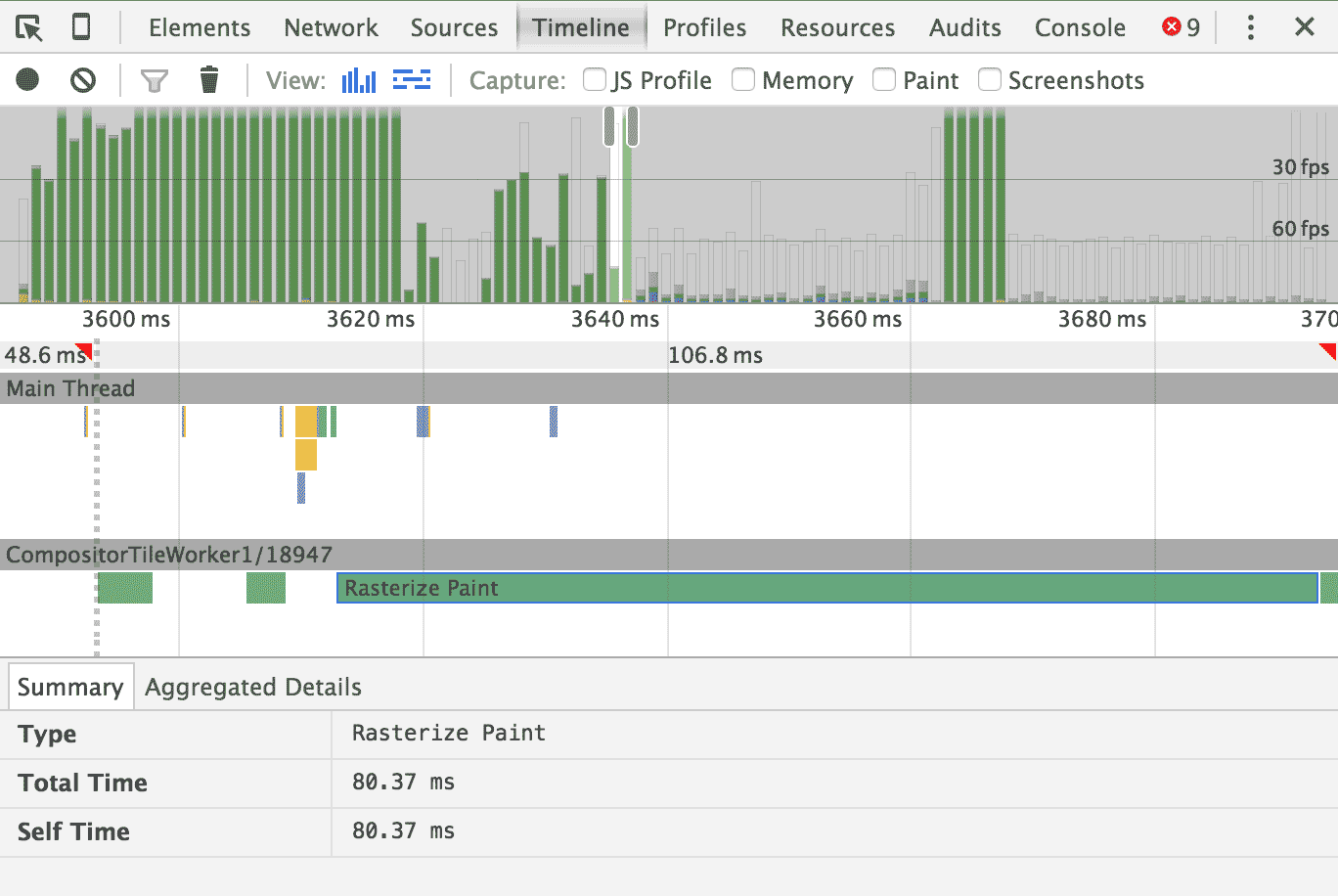 The bars at the top show that we are way below 60fps, even below 30fps. The bars are green, which means “rasterized” and “paint” are responsible. Yes, “rasterize” and “paint” are two operations. A single bar shows a duration of 80ms, which would mean we are rendering with 12fps. That’s not good.

The DOM inspector shows element styles being set by JavaScript (i.e. they flash pink when scrolling), suggesting that background-position is being used to move the background images – a strong indicator for a “not right” implementation of parallax scrolling. A quick look at CSS triggers (another helpful website by, you guessed it, Paul Lewis) reveals that changing background-position will always trigger a repaint – an expensive operation, that is also entirely unnecessary considering that the individual visuals haven’t changed, they just changed position. Since these repaints are triggered on every frame when scrolling, the frame rate plummets.

Looking at the code, I found that the site was using a jQuery plugin to do it’s parallaxin’. I removed that plugin and its invocation, and indeed, the background images weren’t moving anymore but scrolling performance didn’t increase, either. Looking around further, I found background-attachment: fixed set on all the containers with a background image. That property is another way to trigger a repaint on every frame while scrolling, so I just removed the background images altogether because I got impatient.

Looking at the timeline afterwards, I was pretty sure I found the culprit as we were easily hitting 60fps. So let’s get our hands dirty trying to fix this.

I won’t reiterate everything Paul explained in his article, as he did it better than I ever could, so I will rather document what I did. But the TL;DR is:

We want to move the background images to their own compositing layer to utilize the GPU and move them around with CSS transforms to avoid repaints.

There’s two more parallax-ly scrolling images and they got the same treatment, but for brevity’s sake I won’t show their in the code excerpts as it is exactly the same. Take a look at the repository for the full code (in nice, bite-sized commits).

I am not necessarily proud of the *:not(.background) selector, but it was the easiest way to ensure that all other content had a higher z-index than the background element.

will-change: transform is a CSS trick to force an element onto its own compositing layer. Sadly, though, it’s one of those things that doesn’t work in every browser. For example, to accommodate Safari, you will need to use a 3D transform like transform: translate3d(0, y, 0) to achieve the desired effect.

The images are now neither fixed nor is there a parallax effect, but we are at 60fps with images, which is… progress. Let’s re-implement the parallax effect.

We can’t use the original jQuery plugin as it relies on background-position and is therefore bad. Parallax isn’t too complicated so let’s just write our own piece of JavaScript.

Here we are fetching the actual background element as well as its distance to the top of the page. We need this data for the parallax effect, but we only need to calculate it once. This is about performance, after all, remember?

Let’s get to the handlers for the scroll and resize event. Both of them just update the values of our intermediate variables defined earlier. The intermediate variables let us avoid accessing the window object, which can trigger a “sync layout”, another expensive operation. Additionally, scroll issues a requestAnimationFrame, where the translation of the background images will be calculated and applied. This debounces the calculation of the new image positions, as it only needs to happen once per frame.

There’s some arithmetic going on in updateParallaxImages, but to make it more intuitive think about parallax scrolling this way: Parallax scrolling are images behaving like background-attachment: fixed, but additionally move by a small fraction of the distance you actually scrolled.

And with that, we have implemented our own parallax scrolling effect that works at a buttery-smooth 60fps.

This is where I wanted to stop, but it turns out that the site is doing some other stuff wrong as well that is related to the parallax scrolling: The images themselves. Coincidentally, I looked the total page size in the network inspector.

3MB is way too much for a simplistic website like this. The individual resources, ordered by size, reveal that it’s the background images that have a massive size.

The images are 1920px in width, but that is not the mistake here and is actually required to have a decent visual on retina displays. Rather, it’s the image format. PNGs excel at large areas of the same color, that’s why digital drawings are usually saved as PNG. These however are photographs with gradients, noise and no sharp edges. So PNG’s compression won’t do much. Lossy compressions achieve drastically smaller file sizes while maintaining perceived quality.

Simply by converting the background images and the player images further down on the page to JPEG with ImageMagick’s convert, I cut the total size from 3MB to 650KB, without any visual impact. By piping our new JPGs through ImageOptim, I saved another 21KB.

That’s a lot better. It’s still pretty big for a page like this, but a reduction to 20% of it’s original size is a good start.

Now I will actually stop tinkering, but there’s a lot more that could be done better on this page:

There’s additional things that could be improved not related to page size:

All the individual steps I took (and a few additional ones I didn’t even write about) can be found in my surma-dump/maelstromgaming repository on GitHub.