Two browsers behave differently when given the same code. Which one is the buggy one? The spec is almost guaranteed to contain the answer, but it’s notoriously hard to read. Maybe this will help.

Note: Before we start: The spec is not the only or maybe not even the best source to get this kind of information. Specs are hard to read, the ECMAScript spec especially so. While there is ongoing work on making specs more digestible for developers, more approachable articles can be found on third-party sites like MDN. You don’t need to be comfortable with the spec to be a good web developer!

The ECMAScript 6 Standard (⚠️ 4MB!) – often abbreviated ES6, or now ES2015 – is a weird and big document. Originally, I wanted to write about Iterators, Generator and their respective asynchronous counterparts. While reading about one of the building block – “Iterables” – I was already lost:

@@iterator? Huh. That’s not a valid property name. So [Cmd]+[F]’ing through the spec, it turns out that @@something is a shorthand for a “Symbol” and there’s also a list of well-known Symbols in the spec. So what are Symbols? What do they do and how do I use them? I thought: Time to read the spec!

The first document I found is a snapshot of ESnext. Those snapshots are going to keep happening every year (hence ES2016, ES2017...). My colleague Daniel Ehrenberg, an engineer on V8 and member of TC39, told me that developers should be looking at the spec draft rather than the snapshots. JavaScript engines like V8 have been trying to keep up with the spec draft rather than going from snapshot to snapshot. If you read my previous post in this series, you’ll remember I said something similar about Web specs. Drafts – use them!

So where’s the ESnext’s draft spec? On the TC39’s GitHub! It’s much smaller (~700KB thanks to GZIP), has a sidenav and even a search bar so you don’t have to awkwardly [Ctrl/Cmd]+[F] through the website like I did. 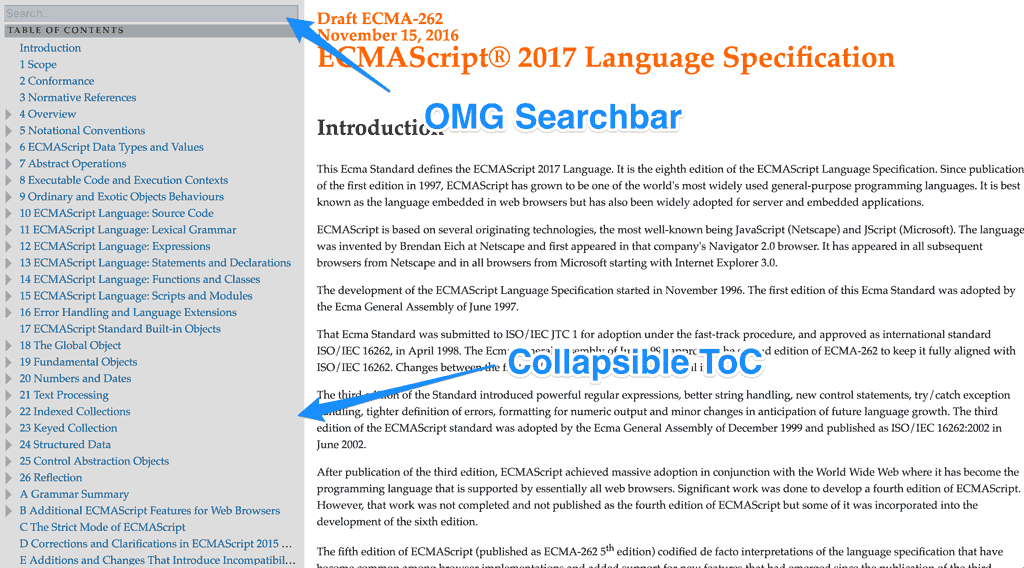 Let’s make use of the new found superpowers that is a searchable ToC and look for Symbol. Section 6.1.5 as well as section 19.4 show up:

The Symbol type is the set of all non-String values that may be used as the key of an Object property (6.1.7).

Each possible Symbol value is unique and immutable.

Each Symbol value immutably holds an associated value called [[Description]] that is either undefined or a String value.

The Symbol constructor is the %Symbol% intrinsic object and the initial value of the Symbol property of the global object. When Symbol is called as a function, it returns a new Symbol value.

When Symbol is called with optional argument description, the following steps are taken:

There’s a lot in here, so let’s go through it bit by bit.

Note: I built a small Mini-DevTools thing to show you what steps I took when I tried to wrap my head around things. It runs the code in your browser. So if you don’t have good support for recent JavaScript features, you might run into problems. You can also edit the code in place if you want to, but it will break the syntax highlighting. Disclaimer: console.logAndEval is totally not real.

The first thing I did was to play around with the constructor a bit. According to 19.4.1 “the Symbol constructor is [...] the [...] Symbol property of the global object.”. As defined in 19.4.1.1, it takes an optional description as argument and said argument will be turned into a string with ToString(). Furthermore, according to 6.1.5, each Symbol is unique:

I was a little confused by step one of the implementation spec of the Symbol constructor:

What is NewTarget? After Cmd+F’ing through the spec (and, admittedly, googling it), I found something new I didn’t know about JavaScript (can you see what I did there?): The NewTarget tells you what the target of the new keyword was. That means inside functions new.target is a way to figure out if the function has been called with new keyword or not.

So step 1 in the Symbol() implementation prevents it from being called as a constructor (i.e. with new).

But now back to Symbols.

This is something I never really thought about. It is implied here that up to this point objects can only have strings as property keys. Again, I had to verify this in DevTools because I thought: What about arrays?!

Alright, so all property keys in objects are strings. And now there’s symbols, which are the exception to this rule.

Let’s play with this!

The fact that JSON.stringify() makes sense as Symbols are unique and can’t be serialized, but why does Object.keys() not list them? The main use-case for Symbols is to have a way to specify properties and methods that are guaranteed to not name-clash with anything else in the scope. They are also supposed to give you a way to hook into existing algorithms. Section 6.1.5.1 lists “well-known Symbols” that you can set on an object to make existing algorithms treat your object appropriately.

These well-known Symbols are exposed as properties on the global Symbol object.

One consequence of using Symbols is that we need some way to distribute our symbols so we (or others) can use them. Well-known symbols attach themselves to the global Symbol object, Symbol also offers a registry. The only way I know about this is because section 19.4 lists all properties of the Symbol object. In-between all those well-known symbols are two convenince methods: Symbol.for() and Symbol.keyFor(). Symbol.for() is like a factory. If a symbol for the given key exists it will be returned, if not it will be created, appended to the registry and then returned.

You might be asking why to use the provided registry over just attaching Symbols yourself to the global Symbol object, and the spec has a hint as to why:

The GlobalSymbolRegistry is a List that is globally available. It is shared by all realms.

Let’s try that out!

So coming back to my original question: @@iterator is a well-known symbol I can use to make my object iterable.

We made our object iterable using Symbols. Wohooo! Honestly, I am just scratching the surface of Iterables & Co here and will talk about this in more detail when I am done with Part IIb of this series. I think I should be able to cover Generators and their asynchronous version in the next post now.

Even though the spec is unwieldy, the engineers are working on making it more accessible and approachable. In the mean time I hope this blog post can guide you to find the things you are looking for.